The Cost of “Free” Public Wifi 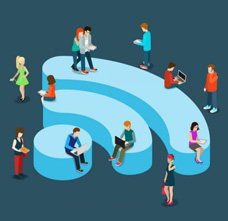 No, we don’t mean to say that free public wifi(s) are no longer free. They will be as long as you have hotels, restaurants, cafes, malls and other such places around as this attract crowds. But what we do mean when we say even ‘free’ public wifi(s) come at a cost is that your web security may get seriously compromised when using public wifi(s). Therefore the cost we are referring to here is your web or online security.

To Use a Real Life Analogy: Road Often Traveled is Usually Bad

The road often traveled is usually bad for three reasons. One, you’ll have a bumpy ride if you travel on them because they may be in a bad condition owing to wear and tear as too many vehicles would have passed through them. Two, since many prefer or use it, they may be too clogged up and you may end up reaching your destination very late. Third, a path often frequented will obviously be a target for muggers, so chances of you being mugged or robbed are relatively high while travelling on these roads.

Along similar lines (and more closely associated with the third stated reason), public wifi(s) too are bad since they are preferred by many; since the protection offered by them ‘often borders on very little to nothing’, and since hackers simply love public wifi(s).

Public Wifi(s) are usually not password-protected. And even if they are, the security they offer is rather flimsy. Mainly because those places offering free public wifi(s) hardly care about you or the Wifi connection’s security. Their main focus is to lure customers to their places using these free public wifi(s) as bait. Then, why would they care enough to safeguard these connections, or you, for that matter?

So the moment you’re on a public wifi connection, you become susceptible to hacking.

Since public wifi(s) are open to all, it only takes for hackers is to deploy the right kind of eavesdropping software to get hold of the data being accessed using these connections. Two major risks posed by public wifi(s) are:

1.   Credential Theft: You may have a string of credentials to a wide variety of software applications you may be using online. Using them on public wifi(s) is not such a wise thing to do because public wifi(s) are always prone to hacking. The worst part is your credentials easily falling into the wrong hands.

2.  Man-in-the-Middle Attacks: Another problem with using public wifi(s): data interception. That is, as you communicate with other parties online, your data may be intercepted by malicious hackers because public wifi connections are not secure. And the intercepted data will be used by hackers to their advantage.

No matter how unsafe public wifi(s) are, there will always be times when you have no choice but to connect to them. This is especially true for those who are always on the go. Therefore, to ensure your safety, if and when you choose to access a public wifi, here are some tips for you.

Your Wifi Security will be enhanced if,

1.  You Use VPN: VPN stands for Virtual Private Network. Which means you’ll be establishing a private (and a secure) network within the public network you are using. This will totally eliminate the chances of you being hacked because your connection will be encrypted.

2.  You Access Websites using HTTPS protocol: Another way is by ensuring you exercise online discretion. That is, access only websites which use https protocol or SSL certificates – which are safe against hacking and for communicating with its users.

3.  Enable Your Firewall: These days firewalls come inbuilt into your PC(s). All you have to do is enable them to filter out incoming traffic and regulate them so as to avoid any malicious attack. This again will safeguard you while on public wifi.

Therefore the next time you connect to public wifi(s), ensure that you are exercising enough precaution to stay safe from hackers.