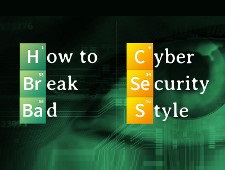 It happened yesterday. The day we’ve all been dreading since we first saw Walt in his tighty whities. Breaking Bad came to an end. None of us wanted it to happen, but we couldn’t stop it. Just like no one could’ve stopped Walt from breaking bad, it was inevitable. To ease your pain from the conclusion of the BEST show on television, I thought of some other ways you can break bad, cyber security style. Are your ready?Get Your Own Personal Backup Plan

Mike may have been the go-to guy for cleaning up messy situations, but if you need a sleazy criminal lawyer to help you get out of trouble with the law, you “Better Call Saul!

Walt and Jesse’s actions consistently put them in trouble with the law but they always had a Backup plan – Saul. After Walt killed Gus, Walt and Jesse had no place to cook their meth. They needed a Backup plan and it certainly wasn’t going to be their old RV. So, they called Saul and he helped find a venue for a new meth lab… your house.

How can Saul help you break bad cyber security style? You need a Backup system for your files. I can assure you that Walt had multiple copies of his confession tape in which he accused Hank of forcing him to cook meth. A smart guy like Walt would never send his only copy to Hank without first making multiple copies. Who knows, he may have even stored his extra copies in the infamous Cloud. The point is clear, back up your stuff! Whether it’s highly sensitive data, photos of your cat, or just plain old files, they’re not worth losing because you didn’t have a Backup plan. Remember, Saul can’t help you retrieve your files if they no longer exist. But, as long as your files are backed up somewhere, “s’all good, man.”

Walter knew he needed to keep a low profile to avoid getting caught. The man had a brother-in-law in the DEA after all. That’s where Heisenberg came in, Walter’s alter-ego. I’m not sure of the exact moment when Heisenberg was born; maybe the moment Walt shaved his head or maybe he was in there all along. Either way, the transformation from meek school teacher to fearsome drug kingpin was complete and there was no turning back. Heisenberg was Walt’s way of getting his name and reputation known in the drug world without sacrificing his name in the real world.

Just like Walter kept a low profile to avoid getting caught, you should also keep a low profile online to avoid being a victim of cybercrime. I bet Walt didn’t have a Facebook profile and I’m sure he wasn’t making status updates from that old-school flip phone of his. Can you imagine what his status updates would have been?

Back to my point – all it takes is a little bit of personal information for cybercriminals to form a highly-targeted spear-phishing attack against you. On Facebook, most of us list our name, birthday, hometown, current city, job, relationship status, pet’s names… the list goes on and on. This personal information paired with your “Likes” gives cybercriminals all the ammo they need to target you with a highly personalized spear-phishing email.

The solution – keep a low profile. I would never suggest that you get rid of your Facebook account because well, how else would we stalk our friends, family, and co-workers without having to actually speak to them in person? Since you’re not likely to delete your social profiles, nor do I suggest you create an alter-ego, the simplest solution is to be aware of how to avoid a phishing scheme.

Walter White, a gentle Chemistry teacher dying of cancer and Gustavo “Gus” Fring, a respected business tycoon, philanthropist, and public booster for the local DEA office, were both unsuspecting criminals. At first glance, you’d never suspect either one of them to be running a drug empire, murdering their enemies, or poisoning innocent children. But they did. And they did it well. Walt and Gus were excellent at hiding in plain sight and concealing their true nature.

When it comes to your online security, expect the unexpected. Don’t click the link that says,

If it’s too good to be true, it probably is. You should expect updates to pop-up every now and then, but you should also expect that some of the pop-ups will be malware. Don’t simply install every plugin or update that pops-up without reading the details and knowing what you’re getting first.

Likewise, you should not install pirated software just to save a few bucks because you may get more than you bargained for – free pirated software AND a malicious file! Instead, look for the real thing. Walt would want you to use the best, highest quality of software just like he would only cook the highest quality of meth. You can’t fake the good [blue] stuff. When surfing the web, remember to expect the unexpected just like Hank should have suspected Walt and Gus. The next time you eat at your local fried chicken joint, try not to think about how Gus built a drug empire, one bucket of fried chicken at a time!

Instead of dwelling on the fact that the best television series of all time has just ended, try to find comfort in these ways to break bad cyber security style. I hope they help ease your pain and remember, surfing the web without any kind of cyber security knowledge is akin to being on Jack’s hit list… you don’t stand a chance.