Webcam Vulnerability: Who is Watching Whom? 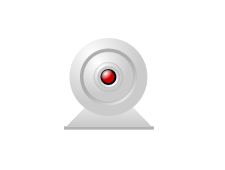 The first video phone was a sensation at the 1939 World’s Fair, and again a quarter century later at the 1964 World’s Fair. It was the tech of the future! Somehow, it seemed to be always in the future and people began wondering whether the future would ever arrive for it. As sometimes happen, the future tech did eventually materialize but in a somewhat different format than originally conceived.

Today’s version of the video phone is the Internet webcam. Slowly, but surely, webcams have become ubiquitous. They come standard on most desktops, laptops and tablet computers. Remote control webcams have become popular tools for monitoring babies or keeping up with what your cat is doing at home while you are at work.

All new communication technology generates privacy and security concerns, and there are plenty with webcams. A few years ago there was a controversy at a Pennsylvania school district that supplied students with laptops. They neglected to tell students and parents that staff at the school could use the cameras to keep an eye on them away from school!

The feature was intended to assist in the retrieval of a lost or stolen laptop, but the privacy issue surfaced when a student was disciplined for something they did at home and the school student produced a photo from the webcam as evidence. The case ended up in Federal court.

More recently, and of concern for Internet security, criminals have been found to hack into webcam systems to spy on people at home. In some cases this has been a prelude to a home invasion.

This week, the US Federal Trade Commission (FTC) warned of overseas web sites that display live views from unsuspecting webcam owners. Watching people and places that don’t know they are being spied on seems to be a popular past time for some people.

To protect against webcam vulnerability, the FTC recommends that is use IP cameras that encrypt the data it sends and you use the strongest security protocols, WP2A. Oh! And be sure to change the camera’s default passwords. Hackers love it when users do not change well known default passwords.

The FTC also recommends that you look for the “https:” in the URL when you visit you webcam site. That is good advice when you visit any site where you might exchange personal information because it means you have a secured, encrypted connection