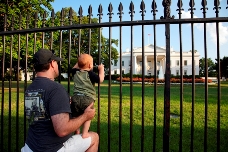 Yesterday, the White House revealed that an unclassified portion of its local network for the Office of the President had been breached by hackers. The network is used by the President’s senior staff, and the the FBI, Secret Service, and National Security Agency are all investigating.

It is believed that this was a probe that did not intend to cause to harm or damage systems and was simply cyber espionage. Unclassified documents can be very useful for attackers, especially for obtaining details to make phishing attacks that use deceptive emails more believable to the targets.

According to the Washington Post, the US did not discover the breach itself but was alerted by an Ally. The Post reports that Russia is believed to behind the attached. The security firm FireEye recently issued a report detailing a wide spread campaign by Russia to disrupt the infrastructure and security apparatus of the US and its NATO allies. The campaign took advantage of fault in the Windows operating system.

On Monday, the Wall Street Journal reported that malicious code had been discovered on a classified US military network. Although it could not be tied directly to the Russian government, the code had been written on Russian language machines and compiled during working hours in Moscow.

This is not the first time the White House network security has been breached. In 2012 the White House Office of Military Affair’s email system was compromised. The office is responsible for the Presiden’t travel schedule and the so called “nuclear football” which contains the codes for the President to launch a nuclear attack. That breach was traced back to Chinese hackers.