Should There be a Right to be Forgotten on the Web? 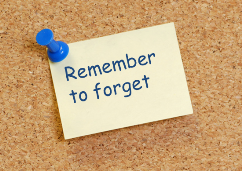 Google began complying this week with a European Court Ruling that recognizes an individual’s “Right to be Forgotten” online. The right to be forgotten is a concept that has been put into law in the European Union that supports the desire of an individual to ‘determine the development of his life in an autonomous way, without being perpetually or periodically stigmatized as a consequence of a specific action performed in the past.’

In the case that the ruling was about, a Spanish man wanted a digitized newspaper article deleted because it mentioned the foreclosure of his home for a delinquent debt that he later made good on.

Google has received over 40,000 requests and has begun implementing the deletion of information from its search results, but only on its search domains in the European Union not, for example, on google.com.

Why?
First, the court’s ruling only covers citizens of European Union nations and that is where most of the requests are coming from.
Second, the google domains of other countries include nations that have strong free speech protections are unlikely to pass similar laws. In the United States, for example, the 1st Amendment’s right to free speech would make such a law unconstitutional. However, it has been suggested that it could pass muster if it was limited to information the requester posted themselves.

Is such a “Right to be Forgotten” a good thing? In some cases, absolutely

I know of a case, 30 years ago, where a person could not wait any longer in a long line to go to a restaurant’s bathroom. He found a place behind the site’s parking lot that he though was out of view. It wasn’t and he was arrested for “Public Indecency”, exposing himself in public. He got a slap and the wrist, but it is still a matter for public record and has come up in background checks.

On the other hand, the law amounts to rewriting the historical record. In the Spanish case discussed above, the removal of links to the article may help the requester, but it may also limit access to other unrelated information in that same article that could be valuable to others.

This current ruling also places a great burden on Google to determine what is and is not “relevant”, a vague concept that is not easily ascertained, with certitude. The course of least resistance may err on the side of the requestor because if they are wrong no one will likely notice. This could lead a great deal of important information becoming inaccessible to web users.