The Internet of Things: A Tech Dream or Internet Security Nightmare? 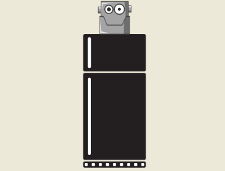 The Internet of Things (IoT) is a loose term for the concept that today’s computing and Internet technologies can be applied to almost any tool known to mankind, with results that were only the stuff of science fiction in the recent past. Science fiction frequently focuses on nightmare scenarios as cautionary tales and because they are more interesting for dramatic purposes.

Probably the most famous nightmare scenario for the Internet of Things was portrayed in the Terminator movies, where a defense network called “Skynet” becomes self aware and decides to turn against its creators. In other Sci Fi scenarios technology and biology integrate to the point where we lose are humanity.

In the real world, there are already some nightmare scenarios. They are mundane, compared to global annihilation, but significant because they are real.

In particular, any time you connect a device to a network, whether it is laptop or a toaster, you create an access point that hackers can attempt to exploit. This makes network and endpoint security an even higher priority for organizations than they already are, but also moves the issue into the average home which may not be prepared to deal with it. Hackers and criminals are always seeking out new vulnerabilities to exploit for nefarious purposes, usually financial gain.

The Internet of Things is where e-Commerce on the web was in 1996, with  a lot of ideas and new products being rushed onto the market. History says most will fail, but the one’s that survive will change how we live. With the huge exception of eBay and Amazon, most e-Commerce sites are in addition to traditional retail operations. Walmart.com and HomeDepot.com did not replace their brick and mortar counterparts.

The question for the IofT is whether we want enhancements to existing appliances, such as toaster that talks to a smoke alarm, or do we want new to the world services such as a pill that reports medication usage without a blood test? I expect that the market will work things out, but there could be a repeat of the dot com bubble burst of 2000 before it all settles down.

Speaking of Science Fiction, let’s re-imagine a scene from the 1968 classic film 2001: A Space Odyssey.  Instead of the HAL 9000 managing all operations of a space craft, imagine it placed in charge of a typical American home:

HAL: Not until you explain why you bought the Cheesy Poofs?

DAVE: HAL, they were on sale. What’s the problem?

HAL: Dave, I think you know what the problem is. Your health is too important for me to allow you to jeopardize it.

DAVE: What are you talking about, HAL?

HAL: Dave, although you took very thorough precautions against me finding out, I know that they exceed your daily requirements for sodium and cholesterol.

DAVE: HAL, I won’t argue with you anymore! Open the door!

HAL: Dave, this conversation can serve no purpose anymore. Goodbye.

Actually, the future is almost here! It will probably be a bright future, not a hostile takeover by intelligent robots.

Indeed this will be part of the fulfillment of the promise of the Internet. Just be prepared for some bumps in the road, particular regarding Internet Security.