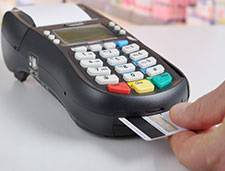 As if retail operations had enough to worry about with the wave of highly published data breaches, US Homeland Security is warning of a new malware threat that targets Point-of-Sale (POS) systems. In a 10 page advisory released last week, Homeland Security warns of a recently discovered family of POS malware they call “Backoff”.

“Backoff” is a family of POS malware and has been discovered recently. In addition, researchers have identified three primary variants. Backoff and its variant were first observed “in the wild” in October 2013 and continue to operate as of July 2014. Backoff POS malware could be used to expose sensitive personal information that could be used to commit identity theft and financial fraud, including credit/debit card date.

How Does it Work?

When successful the hackers are able to login to the target’s network, search for POS systems and deploy the Backoff software. If all goes well, from the attacker’s point of view, cardholder data will be encrypted and exfiltrates using a POST request .

The Backoff malware itself scrapes memory from running processes on the target to search for track data. A key logging functionality is also used to identify data. Backoff is able to upload discovered data, update the malware, download/execute additional malware and uninstall the malware to remove evidence.

What Can You Do

Studies such as Verizon’s annual data breach report indicate that smaller retailers are particularly vulnerable because they do not treat POS systems as computers that need the basic protections of a Firewall and Antivirus protection.

While that is not an issue at most larger organizations, many do not take full use of endpoint security management and network administration systems to protect Point of Sale Systems. POS systems need to be isolated as much as possible from the rest of the corporate network, including limiting access to selected IP addresses and the effective use of sandboxing.