Has the Bitcoin Bubble Burst? 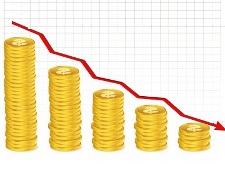 Owners of Bitcoins and fans of the virtual currency are reeling today on the news of the collapse of the largest Bitcoin exchange and a sharp decline in the value of Bitcoins on other exchanges. Trading has been halted on the Japanese site for more than a week, but now the site is down completely.

Mt. Gox, www.mtgox.com, is the oldest and largest Bitcoin exchange. It has shut down and may be filing for bankruptcy do to a reported loss of 744,000 Bitcoins from apparent theft. That represents about 6% of the total Bitcoins in circulation.

Will account holders at Mt. Gox get their money back? Perhaps not. There is no deposit insurance as with US banks or other protections commonly found in the financial industry. Japanese financial regulators say they have no authority over the issue.

Opinions on the Bitcoin the electronic payment method vary widely. To some, it represents no less than the dawning of a new age of individual empowerment and the beginning of the end of the nation state as we know it. Others dismiss it as a fad that rivals the famed medieval tulip craze, the very definition of what we now call an economic bubble.

Bitcoin uses peer-to-peer technology with no central authority or banks. Transactions and the issuing of Bitcoins are carried out collectively by the Bitcoin network. The past year or so has been a dizzying ride for Bitcoin investors. The price per coin rose from about $14 to over $1200 last year. This morning they were trading on some exchanges for as low as $418.

Can it recover? There is a fairly substantial industry of exchanges and firms who accept Bitcoin payments and have a vested interest in restoring credibility and stability to the virtual currency. However, the staggering losses from Mt. Gox means that they have a mountain to climb indeed.