CryptoLocker 2.0 – Are You Ready? We Are 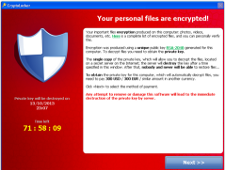 While other security companies and their users are still struggling to deal with the infamous ransomware Cryptolocker, we have no worries at Comodo.  In fact, if you use our Comodo Endpoint Security, with our unique Auto-Sandbox technology, you are already safe and secure from Cryptolocker 2.0 (officially entitled Prison Locker or Power Locker) and other soon-to-go-wild copycats roaming the Internet.

How can we be so sure?  Because with over 70 million total installations of Comodo Antivirus there has not been a single reported incident of Cryptolocker on a Comodo protected computer. In fact, we provide a $5,000 virus free warranty to protect users of Comodo Endpoint Security and have not paid a single claim in over 6 years!  That is why we call our protection “ironclad”.

We’ll explain why, but first let’s review.  What is Cryptolocker?

Cryptolocker is a Trojan virus known as ransomware, spread predominantly through emails to infect Windows computers and extort money from its victims. Some analysts have called it the perfect criminal virus, almost impossible to defeat. We beg to differ, but we digress.

After being installed on your computer CryptoLocker takes control and locks up your data files, including all MS Office files. It then displays a message demanding you pay a ransom to unlock your files, around $300 in bitcoins or MoneyPak .  CryptoLocker itself can be removed by many anti-virus programs. Unfortunately your files will remain locked using encryption that is virtually impossible to break.  Pay up or you’re out of luck!

Last December, Dell SecureWorks published an estimate that the original version of the program had infected around 200,000-300,000 PCs in 100 days.  Approximately 0.4 percent of these victims probably paid the demanded ransom. That may seem like a small percentage, but it would be haul of up to $360,000 for the hackers in just 3 months. With that kind of loot in play it is not surprising to see copycats appear, and they have.

Of particular concern is an identified copycat we’ll euphemistically call CryptoLocker 2.0, aka Prison Locker.  It differs most significantly from the original CryptoLocker in that it encrypts more file formats and spreads through USB drives instead of email.  It reportedly opens up a new locked up Window and disables Windows and Escape Key.  It prevents you from running taskmgr.exe, regedit.exe, cmd.exe, explorer.exe, msconfig.exe while disabling the ALT+TAB key feature.

The following is a side by side comparison.

So, CryptLocker 2.0 or similar will soon be here and more copycats are sure to follow.  Why aren’t users of Comodo Endpoint Security concerned? Because thanks to Comodo’s Default/Deny strategy with Auto Sandboxing, these malicious programs will never have the opportunity lockup their files.

If a threat is known to be malicious, Comodo’s Antivirus (AV) will detect its signature and prevent any damage from occurring, i.e. the encryption of your files. If the threat is unknown, the HIPS and Auto-Sandbox will intercept the malware, stopping it in its tracks, as the virus is never actually installed on your system. Comodo AV labs detect blacklist signatures for malicious files such as CryptoLocker, so the ransomware would go straight into the Quarantine or Sandbox Management consoles of Comodo Endpoint Security Manager (CESM) where the admin could delete it.

CESM 3 packages unsurpassed protective power within our next-generation remote administrative console. This enables the administrator to receive real-time alerts through list or panoramic views of all endpoints and system management capabilities, a feature generally found only in dedicated RMM systems. So, when the user opens the malicious message containing CryptoLocker, CES will detect the malicious (or unknown) file, automatically sandbox it, and alert the administrator. If the admin gets to the alert before Comodo labs, the administrator is able to remotely remove the ransomware from the end user’s computer, regardless of the end user’s location.

Four clicks to security. It’s really that simple! But don’t just take our word for it. Comodo Endpoint Security (CES) is powered by the same patent-pending prevention-based technology that our consumer product, Comodo Internet Security (CIS), uses to protect consumers against CryptoLocker. CIS was recently awarded the top position in the Proactive Security Challenge 64 by matousec.com, a project run by a respected group of independent security experts dedicated to improving end user security. Following the challenge, matousec.com named CIS the “Ultimate Protection Machine.”

In addition to its ability to protect enterprises from malware like CryptoLocker, ESM has many other great capabilities. For instance, the latest upgrade to ESM added several capabilities such as centralized monitoring of sandboxed (unknown) and malicious files, endpoint auto-synchronization via Active Directory, encrypted VNC sessions to local and remote endpoints, and support for Windows 7 Embedded Standard.

To become protected against Prison Locker and its variants download a 60-Day, 60 user free trial now or contact cesmsales@comodo.com for the date of our next webinar.