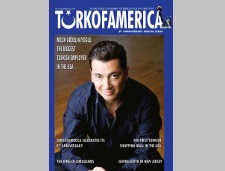 At Comodo, we were pleased and proud to learn that our CEO Melih Abdulhayoğlu has been named #6 on a list of “The Most Influential Turkish Americans” in the April 23rd edition of Turk of America Magazine.

This was not the first time Melih was recognized by Turk of America.  He graced its cover in 2010, as shown to the right.

The magazine’s list “identifies Turkish Americans who are innovative, courageous, and successful in their fields.” It is a very impressive list to be part of, indeed.  For example, the top 20 includes the heads of Coca Cola, Western Union, the Brookings Institution, (the most influential “think tank” in  DC), Maxim, the Albert Einstein College of Medicine and a four time nominee for the Nobel Peace Prize.

Melih earned this honor not just for building a great company in Comodo, but also for his leadership in the internet security industry and his community work. He is listed as a founder of three extremely important industry standards organizations, the CA/Browser Forum (CAB) , Common Computing Security Standards Forum (CCSF) and the Certificate Authority Security Council (CASF). Melih also works with the Scientific and Technological Research Council of Turkey (TÜBİTAK) to promote technology companies in Turkey.

Throughout its history, America has been enriched by the contributions of immigrants from many nations. The Turk America list highlights the fact that Turkish Americans are continuing that great tradition and in numbers that are far disproportionate to their total population.

While technology companies tend to employ work forces drawn from many countries, few companies can appreciate the benefit that diversity brings more than Comodo.  Our staff at our Clifton NJ headquarters includes talent with roots in Turkey, the UK, India, Russia, South Africa and, of course, the United States. With operations in Ukraine, Turkey, Romania, India, Russia and China, working at Comodo is a little bit like working at the United Nations!

International, Global, yet very American too.
After all, a motto of the US is “E Pluribus Unum”. Out of many, one.

At Comodo, we are many. But we are dedicated to the one vision that Melih has laid out for us – “Creating a Trusted Internet”.